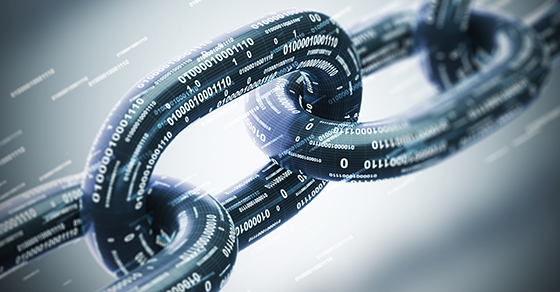 For more information about blockchain, listen to Episodes 10 and 11 of our Everyday Business Podcast.

The term and concept known as “blockchain” is hardly new. This technology surfaced more than a decade ago. Bitcoin, the relatively well-known form of cryptocurrency, has gotten much more attention than blockchain itself, which is the platform on which Bitcoin is exchanged.

One might be tempted to think that, having spent so many years in the shadows, blockchain has missed its opportunity to become widely accepted by businesses. Yet its promise persists, and more and more uses of blockchain might begin to make further inroads into your industry — if it hasn’t already.

In simple terms, blockchain is a distributed, shared ledger that’s continuously copied and synchronized to thousands of computers. These so-called “nodes” are part of a public or private network.

The ledger isn’t housed on a central server or controlled by any one party. Rather, transactions are added to the ledger only when they’re verified through established consensus protocols. Third-party verification makes blockchain highly resistant to errors, tampering or fraud. The technology uses encryption and digital signatures to ensure participants’ identities aren’t disclosed without permission.

In addition, blockchain has seen increasing usage as an internal means of managing data, logistics, and supply chains. Technology of an internal blockchain is not necessarily shared with the general public but still can create a ledger system for internal needs.

Blockchain’s ability to produce indelible, validated records establishes trust without the need for intermediaries to settle or authenticate transactions. So, the technology lends itself to a wide variety of uses.

Perhaps the most talked-about functionality of blockchain is smart contracts. These allow parties to create and execute contracts directly using blockchain, with less involvement by lawyers or other intermediaries.

For example, under a simple lease agreement, a business might lease office space through blockchain, paying the deposit and rent in Bitcoin or another cryptocurrency. The system automatically generates a receipt, which is held in a virtual contract between the parties. It’s impossible for either party to tamper with the lease document without the other party being alerted.

The landlord provides the lessee with a digital entry key, and the funds are released to the landlord. If the landlord fails to provide the key by the specified date, the system automatically processes a refund.

Business owners may also encounter blockchain when looking to exercise, secure or defend their legal rights. In litigation, demonstrating that “service of process” has been completed or attempted can be a challenge. Some companies are using blockchain to address this issue.

Process servers in the field use an app to post metadata — such as GPS coordinates, timestamps and device data — to a blockchain, which generates a unique identification code. Lawyers, courts and other interested parties can use the blockchain ID to access service of process data and confirm that information in physical affidavits or other records hasn’t been altered.

Blockchain continues to beckon forward-thinking business owners with its ability to provide highly efficient and secure transactions — particularly for companies that do business internationally. We can assist you in identifying whether this or other technologies may enable you to better manage your company’s finances.

How to Handle Evidence in a Fraud Investigation at Your Business

2022 Q4 Tax Calendar: Key Deadlines for Businesses and Other Employers